Summertime for me means a lil more sun(and Vitamin D), taking more trips and lots of FREE time to enjoy sports, games and just lounging around(when I don’t have work of course). And while I play my DS lite wherever I go…and PC games when I have work on the computer(debugging…), I can’t help but reminisce to old favorites.

Once upon a time before the Dreamcast’s demise, I lived in the amazing world of Phantasy Star Online……

I remember the first day I bought the game. I was so excited when I discovered I was able to customise my character. From her hairstyle, clothes even her height, I made the character my own, and was ready to go online for the first time.

Being a newbie is always a challenge, but I was lucky to join a team of trustworthy people who didn’t mind helping me out. They bought me a better weapon and allowed me to join them for the forest mission. Before we transported to the dragon we all went back to the ship to buy more items. But while one person was still buying items,We were accidentally transported to the Dragon’s lair!!! (I think someone pressed transport by mistake)
My first bout with the dragon was a scary one, I died so many times..and remember reading the chat bubbles telling me to run around and stay on the outer rim. It was chaos, I didn’t know what to do. With two low level characters that died repeatedly and one experienced player who tried to run around to revive us as the fire dragon flew around spewing fire we persevered and ended up defeating the dragon!!!
After that experience, I knew this game was something special, and soon it became one of my best gaming experiences.

My team always played on the same ship – Titania 9.
That’s where I spent hours each day chatting in the lobby until someone set up a game(password protected of course) that we could join to play the missions. My friends from the Saturn’s NetLink days joined PSO and we chose from four levels to play: the forest, the caves, the mines and the last temple level(can’t remember the name), each taking at least an hr to get through.

Each player even had a MAG, a small creature which resided near your shoulder. Your sidekick and protector. Having a MAG was like having a small pet at your side, and comparing your MAGs to the others was always really cool. I set my keyboard shortcuts to feature my own Greetings and BattleCries. I traded weapons and sometimes gave a helping hand to newbies which increased the sense of community this game had.

I remember how devasted I was when I got killed and as I lay there dead, I see someone snatching my weapon. You feel so helpless when you die and not only does noone bother to revive you 😦 but they steal your weapon. From that point on, I was more careful about which games I would join.

But what was even more devastating was that time when my file was accidentally erased during an attempt at transferring VMU data to another VMU. I had no character after leveling her up for months. But I wasn’t just going to whine, I wanted to play! So, I worked extremely hard to level up my new character just so I could continue to play with my friends. even if it took me countless hours and for a weak character countless deaths at the dragon I was able to regain my levels and became one of the strongest members on the team.

The PSO community was huge, as I found out attending E3 when I met some guys from PSO World while standing outside the closed Sega Booth. They told me about their site and I shared what I liked most about PSO. Phantasy Star Online was everywhere it seemed, and I continued to stay addicted.

When they started charging users $10/month to play online, we paid it. How could we let $10 keep us from enjoying online play…playing the missions offline wasn’t what this game was about. But somewhere between when they started charging for online play and the time I started playing other online games for free, like Q3A, Outtrigger and UT2003, my PSO life ended, my character NagoftheBNV was left behind as I moved away for College. I would of loved to continue playing PSO, but I didn’t seem to have anymore time and then of course the servers were shutdown.

PSO soon moved onto other consoles GameCube and XBox, and the PC with improved graphics and additional storylines, and continues to live on. But gone are the days of my immersion with this amazing online RPG, Phantasy Star Online. 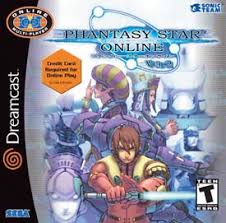