Minigames may be mini but they are packed with a ton of fun especially when you play them with friends.

When you feel like taking a break from the main game, the minigames included do a great job of providing that lil’ something extra to hold a player’s attention and are sure to entertain.

Minigames like those found in New Super Mario Bros., offers countless hours of fun and for some of the minigames they also require skill in outsmarting your opponent. I usually play 2P mode and even though I never get a chance to pick which game to play, I’ve been winning at whatever game is chosen. hahaha…

Some of my favorite among the minigames in the New Super Mario Bros. are the “Wanted” game a where’s waldo type game where you have to be quick to spot either Yoshi, Luigi, Mario or Wario. This can be difficult when its Luigi hidden behind Marios.
Another game that requires quickness is the “Whack Monty Mole”, like the arcade game where you get tickets if you whack a number of moles. It also reminded me of swatting flies during the coffeebreak game in Mario Paint.
And there’s also a bombbomb game where one player is green bombs and the other is red bombs and you can turn a red bomb into a green bomb and vice versa by placing your bombs in the right places.

I’ve been wanting the New Super Mario Bros. since it came out, and have been playing through the actual game. The levels are pretty cool, but its a little too easy. Now that I’ve started playing the minigames adding an extra replay value, it’s an even better buy. A game fun to play alone but even funner with others.

I rememer when I first tried Mario Party, it was Mario Party 5 for the Gamecube, and that was definitely a party game. There were five of us so we switched out someone each time. A person can get so competitive in those games. Like the penguin one where you
had to race past all the penguins to get to the other side safely without being thrown off the iceberg, or catching the most ice cream scoops on your cone. The games are so different and quirky you’re sure to let out a laugh when you beat someone. 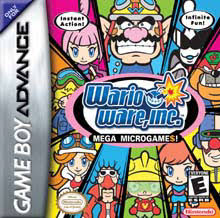 WarioWare Inc. for the GBA was one of the games that got me through prolonged study periods in the library. I remember making the mistake of purchasing it from EB for $39.99 cdn.. instead of checking out other stores, but it was well worth it. Just a compilation of minigames that didn’t last long but never got boring either. I’m still playing WarioWare Twisted, and I can’t wait for the Wii version.

Duke Nukem 3D’s “DeathTank” takes skill to calculate the right distance and angle to bomb your opponents. It was harder if you were in the center and received damage from both opponents. Varying terrains and the location of your tank made it even more of a challenge to destroy the other tanks.

Rayman’s multi-player mini-game, game allowed you to control little lums and go through games like minimazes!

In Sega Swirl you match swirls of the same color to get rid of them. Each player is a different color and gets more points if they matched swirls of their own color. If you eliminate all of your opponents color at the right time they could lose the chance for a huge swirl combo. too bad.

For as long as I can remember, I have always enjoyed and made it an effort to try the minigames. Whether secret easter eggs or not, they are all unique and should be appreciated! It’s like you have two games(or more) in one! And who wouldn’t like that?