I was really lucky to attend Comic-con in San Diego this year. Reading the programming schedule online and seeing the huuge array of things and people to see, it was quite an adventure.
Although I only went on 3 of the 4 days of the convention, those 3 days were fun-filled and packed with EVERYTHING from hanging out on the exhibit floor hunting for a good buy(and there were plenty), to rushing to make the lineups for autographs. I love Comic-Con!

On Thursday and Friday I got there pretty early in the day, but on Saturday…the day was mostly spent driving back to San Diego..THE TRAFFIC…ugh..THE TRAFFIC.

Saturday Re-Cap:
The roadtrip with fellow 1uppers Ryo and AstroCreep started off with some wholesome burgers at In-n-out. 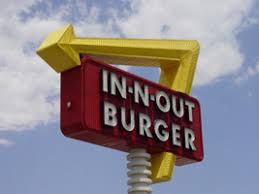 MMMMMmmmmmmm…
It was really crowded but Astro snagged us a table inside!

3 and a half hrs later….
When we finally got to San Diego we were able to park in the parking structure closest to the convention centre instead of the parking lot 15min away.. and off we went to enjoy the last 3 hrs of the day *LOL*

We ended up in this insanely long lineup for SpiderMan 3. And while waiting outside we played Tetris and MarioKart. It was so funny cause everytime the line moved I had to pause the game but everytime I did it, there would be at least one complaint about me pressing it at the wrong time.

Sam Raimi was joined by Toby, Topher, Kirsten, Bryce and Thomas Hayden, and after showing the footage from Spidey 3(WHOA!!) they had a Q&A.
Check out Ryo’s blog for some hilarious video clips from Q&A.

The rest of the time was spent on the exhibit floor..

I downloaded a really neat darts game at the DS Lite booth and got in line to get Charles Martinet’s autograph. Even if the announcement came to exit the exhibit hall at 7pm, he stayed to give autographs for everyone in line!

After the exhibit hall closed we went up to see Teen Titans: Trouble in Tokyo. There was Q&A and then they premiered the movie. I’ve seen Teen Titans a few times on TV, the animation for this one was nicely done and some voice actors were there…like the voice of Beast Boy.

Thursday and Friday was soo much fun as well, even if I didn’t get a G’Kar fan(RIP Andreas Katsulas)

(they were at the freebie table after u pick up your badges and I wanted Straczynski to sign it….but i couldn’t convince the volunteers to give me the last one i saw next to someone’s bag)

From Carrie Fischer to Denise Crosby.. the turtle Raphael turned director of an upcoming movie: “the adventures of Johnny Tao”

and beyond, some of the ppl were friendly to their fans(Denise and Mike Okuda, set designers for various Star Trek series and movies) while others weren’t(like Robert Picardo, the doctor on ST: Voyager).
Still, it was a good time through and through…

I loved my Comic-Con adventure, the panels, the booths, the cosplayers all around. Bye Comic-Con maybe i’ll see u next year?