Rayman Raving Rabbids:
Not at all like the traditional platform Rayman game of the past like that on the Jaguar for example, instead it is comprised of different insanely fun mini-games, all taking advantage of the new versatile wiimote. And although most are pretty easy, there have a been a couple that required quick reflexes with your wiimote.

Being a Rhythm game fan, my favorite level has to be “Bunnies are fantastic dancers.” Which requires you to use both the nunchuk and wiimote shaking each depending on which podium the bunnie is on. Reminds me of Samba de Amigo in a way, and except for the HipHop song(Naughty by Nature?!) the first 3 were good. 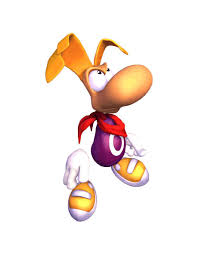 Rayman still has to save baby globoxes but this time he has to finish all these different exercises that the Rabbids force him to do each day.

You can even hear them laughing when you make a mistake in some games(Cute but evil little bunnies)! I love this game it really makes full use of the Wiimote and the Rabbid animation is hilarious. The game concept is similar to WarioWare but these games are a lot more diverse(there is even a Racing level and a Shooter level) and most are longer than a few seconds. It takes skill and you’ll find yourself laughing just watching the bunnies and how clueless they are!

Ack in this Hilarious stage you have to close the doors before the bunnies throw a plunger in your face hahaha..its harder than you think!

Speaking of Rhythm games, I found a copy of Elite Beat Agents, actually before I got the Wii, so I’ve been playing that too.

The songs are better than I thought. After trying the two levels available at PAX and Comic Con I thought that game wasn’t for me. But I guess I really needed to play more than just those levels to have an appreciation for this new American Version.

I still think Ouendan will remain my favorite but Elite Beat Agents does have a lot to offer including really funny stories and a good song selection. At ~$30(the lowest price for DS Games)it was totally worth the buy.

Wiisports is always fun to play. In Wii Baseball all your Mii’s can play on your team!!!

Bowling! This reminds me of the Clubhouse Games bowling, minus the CPU challengers. One thing that I found was if you don’t point the wiimote straight ahead after you roll the bowling ball, it tends to go to the left for me. Had to practice a bit on that game.
Boxing! My first opponent was this bearded guy. Seeing my mii going head to head against this bearded guy just made me laugh and made knocking him out even more rewarding.
Tennis! I’ve been looking forward to playing this one since E3 and it is just as I remember. Although you can’t control where on the court your player runs to, you can do forehands and backhands. Where the tennis ball lands is determined by the angle you swung the controller. I love tennis and now I can play all year long 🙂
Golf! The golf swings are pretty realistic and good practice if you’re a golfer as you aren’t allowed to overswing.
I also discovered the Wii Fitness option. You are given a number of different training exercises to complete from a few different sports and are scored based on your performance! Hah Like Brain Age! I haven’t been able to find more controllers so I’m stuck to 1p for now, which is fine as I get lots of practice.
[ No wii elbow for me,although I did have a scare a few days ago when I thought my arm swelled up from playing Wii constantly, but then found out it was an allergic reaction to the Flushot! ]

Checking my Wiimail daily just comes natural to me now. It helps that the Wii informs me of any new mail. ( Ah-hah! So, that’s why the blue light on the front of the Wii comes on! )

I don’t like having to select each text character to form one word. It takes forever…. But I like how they have an email option where you can send an email to a Wii from your own email accounts!

That’s all for now, after seeing that Zelda Theory video on Rez’s latest blog I have to play more Twighlight Princess!
Hope everyone(who celebrated it) had an awesome Thanksgiving!